Many of my letters are back-dated, due to the adventures described in them happening some time ago, and because I had written, or at least begun writing them at that time. Most of those initial adventures, in Zhuhai 珠海, Hong Kong 香港, and Foshan (Fatsaan) 佛山, took place during January. During the beginning of January I was afforded some spare time, due to my services at work being not needed; and then the end of January begins the approximately four week long Lunar New Year celebrations. At the time my situation in China was looking precarious, so I did my best to explore as widely as I could in a short time.

Though I enjoy travel, and the opportunity to make the acquaintance of some good folk, these travels were warring on me, somewhat. People like to think of travel as romantic, and full of majesty and mystery. I think, however, that many discover, when it is tourism it is often without soul, and when it’s for real it is more like an escape. The persistent traveler is without culture. Though people from each place may identify her or him as of some class of humans from some other country which are always such and such, the individual traveler begins to know they are of no country, and are neither such nor such. 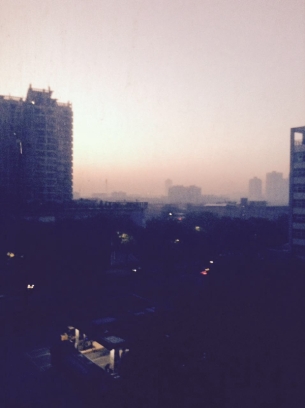 View from my hotel room.

But I digress. For most of February I stayed in Guangzhou 廣州, taking the short trip once or twice a week to Foshan for Wing Chun class. Though, I spent more time training with the group in Guangzhou, whom I previously mentioned. Guangzhou is quite a large place, and the trip to the group in Guangzhou often takes just as long as the ride to Foshan. This also began to be tiring. Going to Wing Chun class four times a week is a lot of work in itself, but at two different schools… I needed to choose one. I have been training hard at the Guangzhou school, under Peter Lee 李華湛 since.

Life quickly changed at the end of February. Still feeling my situation in China to be very precarious, teetering in a large part on whether or not my work situation would improve, I knew not how things would turn out, and expected drastic change at every moment. Things went well enough. I have been balancing my time carefully among several endeavors: work, wing chun, translation, writing, and certain personal pursuits in literature. It is not easy, when virtually all of these things require both creativity and concentration, which tend to be in low supply.

Anyhow, my Wing Chun discoveries have been mind-blowing, and I hope to share more as the weeks pass. I think, perhaps the most fantastic thing of all is that, I my mind, there really isn’t much difference in the schools. There may seem to be to those who have not tried enough of another “style,” or the newer students who focus so much on the particulars, yet I find the more I learn the more sameness there is. I think, perhaps, a central theme is in the aim of the teacher. I think the teacher that keeps in mind the original intent of the art, to transform the body into a weapon, will always find common ground with any school or martial arts practitioner of the same mind. I think this is what attracts me to the Guangzhou school. Though the teacher is very approachable, and gentle, he knows how to use his skill for real, and appreciates those who also want to know.